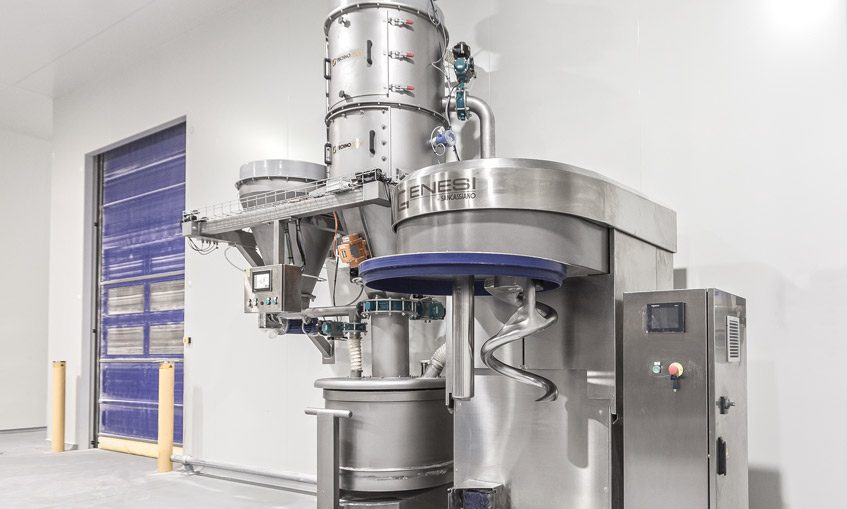 Bakery products, primarily breads, sweet rolls and buns are high production volume and temperature control during mixing is critical to the final quality. The sheer act of mixing imparts frictional energy that causes heat, but it becomes especially important with artisan dough because it affects the process downstream in areas like sponge and dough development.
In the tradition of artisan bread, it is necessary to obtain a final dough temperature comprised between 20 and 26°C. In automated bakery operations, mass production and frozen dough, the dough temperature can be as low as 16°C. That said, bakers should remember that temperature is about not only being lower but also being maintained for dough uniformity.

Principle sources of high temperatures are the heat of hydration (flour absorbing water), heat of friction (mixer motor energy) , and the base temperature of the raw materials.
Let’s review on the different technologies to control the dough temperature, and cool it down …

To maintain consistency in dough temperature, mixer manufacturers constantly improve on the design of their mixer enabling to reduce the heat of friction and at same time to add higher amounts of water (therefore more cooling media). Other suppliers offer tools for bakers to monitor dough temperature during mixing, with temperature sensors that help work in conjunction with the mixer through a PLC to control the mix time.
Mixers can also incorporate cooling features into their equipment design. Temperature control can happen through a refrigerated jacket on the bowl or a refrigerated agitator bar.

Chilled water and/or ice is added to offset the heat factors of mixing. In fact, water temperature is the main factor on which the baker can have a direct influence since the water temperature can be increased or lowered depending on whether you want to act on the temperature of the dough in one direction or the other.
There is a multitude of suppliers for water chillers, but only few can dispense water at +1°C (before freezing) and guarantee a uniform temperature. The installation scheme is also critical : water temperature at 3°C at the outlet of the chiller, often reaches 5 or 6°C in the mixer!

The ice is used in summer when the flour is the hottest and the water chiller is in temperature stop.
Ice is usually dosed manually and compensates for a volume of water. It can be tricky to manage because the operator has to manually dose and incorporate. The other point is that the addition of ice modifies the mixing parameters since it takes time to melt and disperse homogeneously in the dough.
But not all types of ice cream are equal. Manufacturers like Ziegra act on the shape and size of the ice to allow an almost immediate dispersion. The « StreamIce » or « Liquid ice » also became more popular. The StreamIce allows to replace all or part of the chilled water with water at -0.5°C ! But the biggest advantage is that the ice can be dosed accurately with a flow meter. The process becomes automatic without the operator to intervene, and overcomes possible human mistake.

The temperature of the flour

is subject to changes as a result of the carrying and storage conditions. It is colder in winter, but often warm in summer when the storage conditions are not controlled, or if a regular rotation in the silos is not ensured.
The normal rotation of a silo is 2 to 3 days. Beyond 3 days, the temperature of the flour may be affected if the storage conditions are not optimal. We consider +1°C per day of storage in silos according to the surface of the silo in contact with the material (the flour being an insulating media!), and the type of extractor used (vibrating / fluidized).
The type of pneumatic transfer also plays an important role. Some facilities offer recirculation of the flour from silo to silo (loop). In such case, the air generated by the blowers performs a thermal exchange with the flour during the transfer phase, while modifying the atmosphere in the silos to a dew point. To overcome the heat exchange, suppliers of pneumatic handling systems nowadays offer vacuum conveying without recirculation (dead end receivers). Vacuum conveying allows to convey material at ambient air temperature.
The optimal solution is Flour Cooling! These units operate on the principle of cryogenic gas injection (liquid carbon dioxide or liquid nitrogen) or by heat exchange with cooled air in a closed circuit.
The delta T obtained goes from 8 to 16 ° for the most elaborate models: a flour temperature of 30°C in the silos is dispensed at 14°C to the mixer. Furthermore, the use of these fully-automated systems eliminates potential human mistake with adding manual ice, provides for a reduction in costs, and increases the efficiency of batch production.
Here again, the design of the Flour Cooling unit is essential to guarantee the uniformity of the temperature batch after batch. Few suppliers have access to this technology. The FluidAir® system allows cooling as well as regulation by programming a desired temperature setpoint.

About author: Technosilosap
Prev
Next

Any cookies that may not be particularly necessary for the website to function and is used specifically to collect user personal data via analytics, ads, other embedded contents are termed as non-necessary cookies. It is mandatory to procure user consent prior to running these cookies on your website.